What is Changing the framework (Cambia el marco)?

Changing the framework. New perspectives for an intercultural society was a project that took place between October 2018 and November 2019 that sought to use creative audiovisual practice to show religious plurality from the individual experience of youth.

Why Changing the framework?

Because we want to introduce new frameworks – new languages, new approaches and new experiences – to confront totalizing views on beliefs and to contribute to a greater understanding and appreciation of religious freedom within the scope of human rights.

How did we propose to Change the framework?

By facilitating a forum for exchange and for personal expression in which young people -non-religious and believers of different faiths- were accompanied by a filmmaker in a creative process that combined reflection on their individual life experiences with the learning of film techniques and languages as a means of communication.

The project Changing the framework. New perspectives for an intercultural society was sponsored by the Fundación «la Caixa» in the call for proposals «Interculturality and social action 2018» and implemented by the Fundación Pluralismo y Convivencia in partnership with the Fundación Jóvenes y Desarrollo and the collaboration of the filmmaker Jonás Trueba. Changing the framework also had the support of Cineteca (Matadero Madrid) for the carrying out of the work sessions.

21 young people, aged 14-21, willing to reflect together on their own experiences of living and feeling religion, who want to help build a society more respectful of human rights and who are interested in the language of film as a form of expression.

The religious affiliation and practice of the young people in the group was very diverse, as is Spanish society. Among the participants were atheists, Baha’is, Buddhists, Catholics, Scientologists, Christian Orthodox, Jews, Muslims, Protestants, Latter Day Saints and Sikhs. 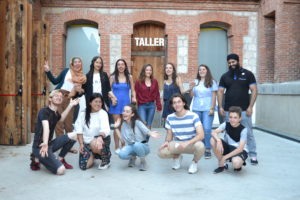 Changing the framework has been based on working sessions in which the young participants were accompanied by the filmmaker Jonás Trueba. The sessions took place in Madrid, at Cineteca – Matadero Madrid (Madrid City Council’s Department of Culture and Sports), from May to September 2019. Six working sessions of around 5 hours each were held, to which a first encounter was added so that the group could get to know each other.

The sessions of Changing the framework were registered by the filmmaker and the participants also documented spaces and characters of their daily lives in the time that elapsed between one session and the next, thus being the protagonists of the image that they wanted to transmit of their personal reality.

In this website you can find a description of the content of all the sessions that took place, of which the result is a documentary that shows religious diversity from its many faces and how beliefs shape the identity of not few people. The sessions consisted of dynamics, conversations, debates, interviews, and individual portraits with the aim of sharing and recording among peers the reflections, concerns, and life experiences of the young participants.

Title: «Changing the framework. New perspectives for an intercultural society»
Genre: Documentary
Duration: 01:13:48
Year and country of production: 2019, Spain
Production: Fundación Pluralismo y Convivencia and Fundación Jóvenes y Desarrollo
Direction: Jonás Trueba
Synopsis: From March to September 2019, we brought together 21 young people, aged 14-21, non-believers and believers from 10 different religious traditions, to reflect on religious freedom and diversity of belief. This documentary is a testimony to that process and seeks to promote another way of approaching religion, from the perspective of Human Rights and the knowledge and appreciation of the «Other».